From Inspiration To Reality

No one ever made or designed anything in a void, and everything that has ever been made drew inspiration from other things which the artist had already seen. Designing in this way is not the same as copying, which is the simple act of reproducing something that already exists. Sometimes the line between a copy and an inspired design is not so easily discerned. Sometimes we make changes just to make sure that the inspired piece is not an exact copy, and sometimes changes are made to suit the taste of the client.

Last summer whilst in the Museum für Angewandte Kunst in Köln, I was deeply attracted to this table and knew that it could make a lovely desk, but I also knew that it would need some modifications to be suitable as such.


The first 'problem' is that the centre ornament hangs too low, and one would hardly be able to sit at it. the second problem is that the size is too small to serve as a desk. With these problems changes had to be made to the size and proportion whilst maintaining the look and feel of it.

I made a full sized rendering of the design in order to work out the size and proportions and to add the details for a drawer in the front as I posted in a previous blog episode. 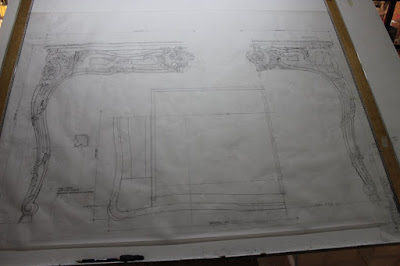 Once the design was done it was down to doing the carving and putting it together. 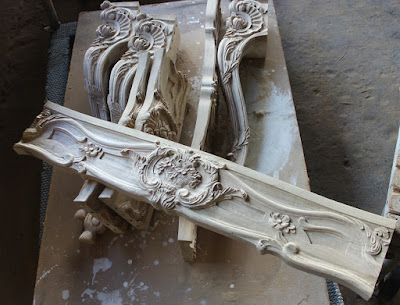 After it was assembled it then had to be finished; first white, then gold leaf, then the real magic of applying a glaze to give both the white and the gold a nice tone.


Now all the is left is a leather top, but that is still on order so I will have to apply it later.

Varnished Furniture In the Middle Ages

Not so long ago Steffen and I went to the Philadelphia Museum of Art to see what they had to offer in their medieval collection. The trip there took more than two hours, and we had to be back home at a reasonable time due to the fact that he has a family, so I was mostly taking pictures instead of studying what was on exhibit.

If I have limited time in a museum I tend to operate in a "shoot first, look later" sort of mode. When 'later' came, and I was studying my pictures, I was pleasantly surprised to see a detail that I had never noticed in any paintings before. In this painting, by an anonymous Flemish painter working in the last quarter of the 15th century, I saw evidence of a highly polished furniture surface.

This is important, and I make mention of it, because most people seem to assume that (unpainted) medieval furniture was dull and dry, either entirely unfinished or perhaps only having a single coat of linseed oil, which gives not sort of gloss to the surface.


I looked through pictures of my own furniture and realised that ordinarily, the glossy surfaces that I work so hard to achieve do not really show up very well in photographs. This is important because it would be a detail that someone would probably not ordinarily put into a painting either. Below are a couple pictures of furniture which I know to have a very fine sheen of varnish to them because I made it, but that sheen is not well reflected in the photos. 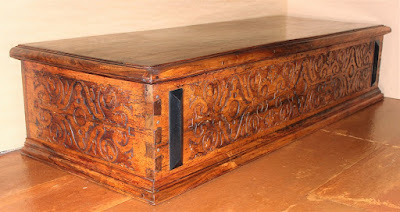 Seeing this detail in the painting from Philadelphia, I looked through other pictures to see if I could find further examples which portrayed this characteristic. Sure enough, one of my pictures from the MET had a bench which also exhibited a highly polished surface.


Cennino Cennini mentions varnish and Theophilus gives two recipes for making it. There is no real difference to his varnish recipe of the 11th century than there is to that which is in a book I have from the late 19th century.

If varnish existed, it must have been used; but for what. In Theophilus' writing he only specifically mentions using it on paintings, metal, and on doors, but it seems to me safe to assume that it would also have been used on furniture, and here are two 15th century examples which clearly show that it was. Once one sees these examples, and knows what he is looking for, there are bound to be others. 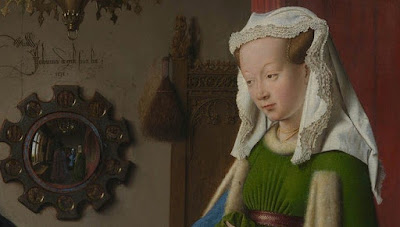 Above is a detail, found in Wikipedia, of the famous Anolfini Wedding, by Jan van Eyke; below it is a picture I found on the web, of someone's model of the room seen in the painting, perhaps used in a dollhouse. I show these two  pictures so that one can see that in the original painting there is actually
much more highlights to the carving than is visible in the model, which has  a less polished finish. It requires very specific lighting from a sharp angle to achieve any sort of meaningful highlighting to a carved surface, as can be seen from the picture of my carved chest pictured above. It is a shame that I could not find a more clear picture of this painting, because the highlights on it are brighter than they look from this photo, but it definitely represents a varnished chair. Below is pictured a detail of a stool which I made, which exhibits some of the same highlight details from direct overhead light (the sun); much like the direct side-lighting which illuminates the objects in the painting.


Knowing what to look for, and allowing for period stylistic trends, I now have more confidence to believe something that I have long suspected, which is that the details in this painting, by an anonymous 13th century Italian painter, exhibited in the Washington National Gallery, also represents an highly varnished chair.


My original reason for believing that this represented a highly varnished chair, when I first saw it 22 years ago, was because of the similarity of the treatment of the highlights on the fabric, which represent silk, and the highlights on the wooden parts. Now that I have seen later paintings which clearly demonstrate a varnished surface, and I know that varnish existed and was used, I have no reason to doubt that this is what is represented in this and other similar 13th century paintings. Much information put into paintings has been lost to us from the changes in painting techniques and the way we see and portray things.

Posted by Johann von Katzenelnbogen at 4:11 AM 2 comments: