A few years ago as I was studying some pictures from the vitraux de la cathédrale Notre-Dame de Chartres or, the stained glass windows of Chartres Cathedral for those who do not understand French, I came across this picture of two workmen making chests. I was immediately drawn to it for several reasons. The first was because I noticed that one of the craftsmen was using a plane. This window was made at the end of the 12th century, a time when most people tend to believe the only tool used by furniture makers and carpenters was an axe. I have even read books that postulated the idea that the plane had been “lost” and was only re-invented/discovered in the 13th or 14th century. Finding this picture, portraying a plane very much like those in use in the 15th or even the 19th century adds weight to the idea that the plane never actually “disappeared”.

Another reason that I was drawn to this picture was because it shows the form of one type of a chest made in that time period, (and for millennia before then) and seems to indicate a degree of ornamentation to the chest as indicated by the parallel lines on the legs and another line below the top. Though the end of the 12th century is actually “late” in the history of the Middle Ages, most anyone referring to furniture from this period would call it “very early” for the simple fact that almost no furniture from any time before that survives. Finding a good depiction of a piece of furniture from this period, then, is exciting for anyone interested in the history of medieval furniture. Finding a picture depicting the making of that piece of furniture is even more exciting, and rare.

As I studied the picture, I noticed an unfamiliar tool in the hands of the man on the left. Over the weeks and months, after first seeing this image, I pondered the tool, its actual form, and its use. I began to speculate that perhaps it was some sort of moulding shaper; i.e. a type of scratch stock, based on the parallel lines along the edge of the piece he is working. I began to think of how this could be fashioned and how it might function, and even got as far as holding a moulding plane blade at a scraping angle and trying to use it by pulling it towards me. The one thing I had not yet worked out in my mind, was how the tool’s handle might have been attached.

Fast forward a few years, and on the 30th of November of last year (2015) I read an article posted by Peter Follansbee on his blog about traditional Hungarian chests. In this article, I saw a picture of Mr Tamas Gyenes using a tool to make grooves or rebates on the legs of his chests. I had an instant “aha moment” of recognition. I was busy then, though, and did not have the time to pursue this notion further. This past week, however, I looked up Mr Gyenes’ website and then contacted him about the tool he was using. My suspicion was that it was the very same tool as that pictured in the Chartres window.

The next day I was delighted to receive a reply from Mr Gyenes, expressing equal conviction that the tool was indeed the same in both the window, and that used by the traditional Hungarian chest makers of the Carpathian Valley; the last survivor of which he is. His words were, “Yes, it is true! It’s AMAZING! You are a very good fellow! There is a craftsman depicted on the cathedral’s window who is working with the same tool as me.
There is only 800 years between us...”

He then sent me another more lengthy email a few days later, explaining about the tool and how it works etc. In Hungarian, it is called a hornyoló. It seems that the cathedral window artist even got the detail of the cutter on the tool right, as it is a ‘U’ shaped hook on the end of the tool. By holding this tool with both hands, one on the iron part, the other on the wooden handle, the artist pulls the tool through the wood, repeatedly removing strips as is done with a plane, until the desired depth is achieved. I assume that only skill and practice render straight and accurate rebates, as there is nothing, save the craftsman’s dexterity to guide it.

Mr Gyenes works with green timber, and apparently that was the tradition as practiced by the makers in the period which he studies. In fact, working green wood was the tie that connected him, and Mr Follansbee in their initial exchange. There seems to have been a tradition of working green wood in the earliest period of American Colonialism. The traditional carpenters of Germany are also known to have worked “green” timber, and even Vitruvius mentioned that the timber should be worked from trees that were felled in the autumn and winter, whilst the sap was down in the wood. One could assume, then, that in medieval times, green wood was also worked, and thus the craftsmen depicted in this window may well have been doing exactly the same work as what Mr Gyenes is doing today; keeping alive a tradition that is actually thousands of years old. 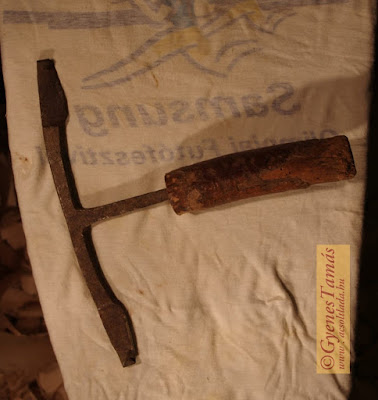 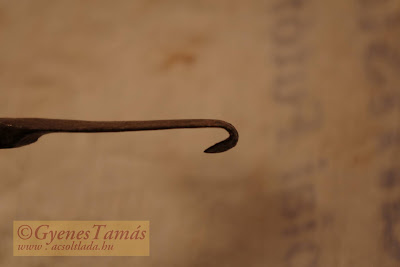 Incidentally, Mr Gyenes was completely unaware of the picture in Chartres Cathedral, and so was absolutely delighted to see it and learn that the tool he uses was much older than he had previously been aware of. I was very happy to be able to share such a find with him as well as finding the answer to the mystery which I have pondered for some time. The fundamental design of the type of chests he makes is much wider than the Carpathian valley. Although there are elements of the chests of that region which make pieces from there unique to that place, the general form of that chest can be found in clay coffins of the 13th and 14th century BC Minoan culture. There are also some of these found in the UK and many more from Germany. Doubtless this design is nearly as old as time; I wonder if this humble tool of Mr Gyenes and the one pictures in the cathedral window share an equally lengthy heritage?
Posted by Johann von Katzenelnbogen at 5:48 PM