It has been quite some time since I posted anything on this blog and I apologies to everyone who has been patiently waiting for any news. The truth is that the project that I have been working on since November, and actually for more than two yeas, took far longer to complete than I had anticipated.

Originally I was to have been done by the end of December, but it quickly became obvious that that would never happen. I then projected an end of January completion but as thee gilding went on and on that got pushed into February. To push completion off even further the client wanted me to finish two more small rooms connected to the main room, so here we are at the middle of April and finally it is done (almost).

I said almost because there are still a few things that will eventually get done. For one thing, the panels on the cabinets are too plain and I am planning some parquetry for them, surrounded by a thin gilt border. There is also talk of doing some faux marble on the lower wall panels, but that has not been finalised. In addition, the two panels over the doors need some painting, so in fact, there is still quite some work to do in this room. The good news, for the client, however, it that he can finally begin using his office, something that he has been eagerly looking forward to for nearly two years, since the planing of this first took place.

I was so busy with this project in January and February that, were breathing an option, I would have forgone that. By the end of March, however, I was really needing a break and took one in the form of visiting Washington DC to see the cherry flowers one cloudy, chilly, spectacular Sunday morning.


A couple weeks ago I also was asked to participate in Catholic University's "Medieval Day" where I had a table set up with some of my carving, boxes, and a couple reproduction medieval tools created by myself. Unfortunately most of the pictures that I took did not make it onto the memory card, (I have no idea what that was about) but I did capture this very poignant image.

Back to the room, here are a couple more shots. In honestly, when I look at the whole thing it almost makes me wonder why it took so long to get finished. The end was so long in coming that the completion was very anti-climatic. At least the clients are pleased with it. 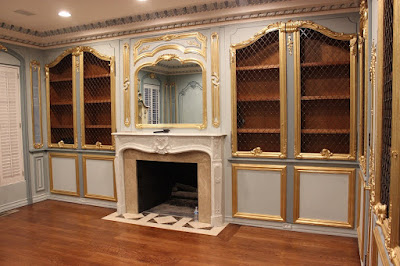 I don't like taking pictures with the flash on the camera because it tends to "wash out" a lot of areas but this one is not too bad and it gives a much closer to true colour impression.


Oh, yes, one more thing that still wants finishing; the leather on the top of the desk has not yet been attached. There is still a lot of decorating and furnishing to do to make this a completed office, but these five pieces are my work and thus their inclusion in these pictures.