More Moulding and Painting; Part I of II

I have moved to another room in the house in which I have been doing the moulding project for the past Year. This time I am working on the dining room. It is not nearly so involved as the last project, and thus I will only be doing two posts on this one; this post, and again when it is finished.

The project entails putting up some mouldings on the ceiling, making a medallion and painting it, and re-doing the fireplace mantle. (Plus a few other odds and ends.)


I used a sheet of cement board to make the medallion, applied the cast ornaments, (reworked from ones used in another part of the house) then cast and carved the connecting bars free-hand on the medallion. I used a couple sections of flexible moulding to make sections from which to cast the plaster pieces for the ceiling, and I carved, moulded, and then cast the 42 leaves needed to complete the design.


I first drew out the ceiling life sized on the floor of my shop. In order to draw an ellipse one needs to know the length and the height. Take half the length and multiply it by half of the width; divide that number by its square root, and that gives you the distance to place your pins (called foci) from the centre point. Use a string looped around one point and tied (forming a loop) exactly at the distance to the extreme tip of the ellipse. Take a pencil and make a notch in the edge, near the tip, and describe your ellipse. It sounds so simple but it took me nearly a day to work it out. I then kept the string, took notations of all the measurements, and duplicated the same ellipse on the ceiling so that I would have a guide to install the plaster moulding. It worked out brilliantly.

Of course before any of the drawing or adding moulding or anything could take place I had to make a work platform. I built this right over the dining room table because it was so big it would have been a huge challenge to move it anywhere else. Working on a ceiling for very long in any position gets to the neck; one really has to feel sympathy for all the painters over the ages who laboured for years doing the magnificent frescoes one finds in palaces, churches and cathedrals.


As of Friday half of the leaves have been painted gold. The border around the medallion will also be gold, and there are a couple more appliques which go at the ends. This week I will begin working on the fireplace mantle. In a couple weeks I should be posting the completion of this project. 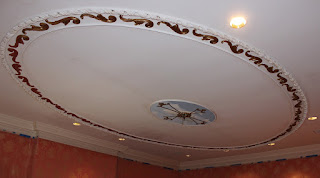 Posted by Johann von Katzenelnbogen at 3:57 AM 3 comments:

To begin with, let me say that I have never been to this place; in fact, I have never been anywhere in the former DDR, so my only knowledge of this church is through the internet. Sometimes Wikipedia is a nuisance, but sometimes it is quite a boon, as it was in the case of the article on the Bad Doberaner Münster. The main interest for me in this article is all of the pictures of furnishings that accompany it.


This church is remarkable for many reasons, such as the fact that its sell was completed in a span of only 15 years, it survived, most of the destruction brought on by the many wars during its history, and the various renovations  that subsequent styles dictated, and by the fact that it retains a wealth of furniture which still survives from the time of its original construction at the turn of the 14th century.


It is for that reason that I point it out in this blog. Most people reading this English language blog probably would not otherwise be exposed to a church in Eastern Germany, but I feel that it should be a must visit place for anyone interested in later medieval history, especially pertaining to furniture. It is even worthy of being a 'pilgrimage destination' for the serious medieval woodworker.

The interior of this cabinet has not been repainted, and shows the original work of ca 1310. It is worth noting how the painting is done right over all of the iron hardware. Most surviving chests from this period have long since lost their paint, but were, in all probability, painted in like manner; only the subject and design varying. This would give a very different look to the furniture than that which most people hold in their minds of dusty grey wood and rusty iron objects; things which no respecting person in the Middle Ages would have ever furnished their house with. 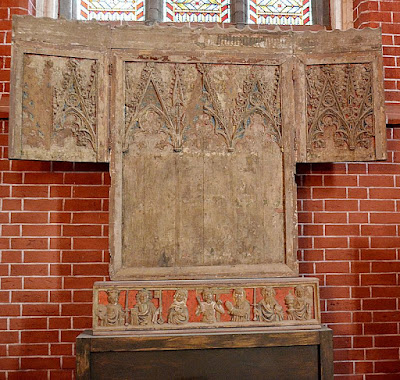 Whilst this church is in remarkable condition, and maintains an extraordinary amount of its original furnishings, it too, suffered the toll of multiple wars and the sad events of the "Reformation" Many items were destroyed, looted, or otherwise damaged beyond recognition. Here is an altar which has lost every trace of its painting and gilding, and another which has lost nearly all, but has suffered the further indignity of being sawn up, most likely by some greedy art dealer or thief.


Not everything looted or sold off from this church has been lost to us, as the original baldaquin (canopy) to this set of seats made its way about an hour south, to a Neo-Gothic Catholic church built in 1803 in the town of Ludwigslust. During the 19th century restoration of the Bad Doberan church a new baldaquin was replicated for this set of seats. Since the original is still extant, we can see that sometimes the 19th century restorers work was very faithful to the original, and perhaps the stigma that goes with their work is not always well deserved.

Another cupboard which was probably on the opposite end of the now missing rood screen (made of brick), and paired with the above chalice cupboard was a sacrament cupboard of about the same date, or possibly from the earlier church. Its state of preservation is not quite as good as the chalice cupboard, but is still quite good.

All in all, I would say it is a small miracle to find so many things still preserved in their original place from this time period, and anyone thinking of visiting Germany should definitely consider having a look at this remarkable monument to history.