This blog was mostly created for the purpose of sharing my discoveries and personal creations related to my own private study of medieval furniture and interiors. Along the way I have also included other things that I have done or been working on, including a renaissance table and the rococo rooms and furniture that I have been working on for the past three years. (Yes, amazingly, it has been that long since I began that project.) It has been quite some time since I have posted anything on this blog, because I have been very busy, and I have done nothing related to the Middle Ages for months. However, due to an increasing cacophony of 'wondering what I have been up to', I thought I would quickly put up some pictures of what I have been working on since the summer began.

All of this work was not performed by myself entirely. I functioned partly as a conductor; designing, demonstrating, and orchestrating the production of the various components what went into this job, and then working exclusively to install and finish everything once it was ready. 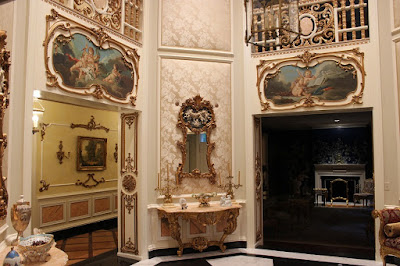 In addition I went to Dubai and engaged an embroidering company to hand stitch the fabric for some new benches in the passageway; I also did some wall sconces and girandoles for the walls. This room was largely finished already, but I had always intended to add the benches and wall-mounted objects. 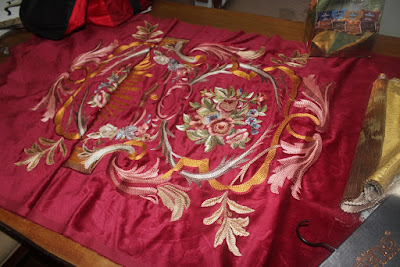